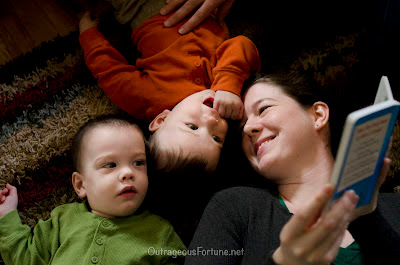 Today I'd like to give a very warm welcome to Shasta Kearns Moore, mom to adorable two-year old twin boys, JJ and Malachi. Malachi has quadriplegic extrapyramidal cerebral palsy and dysphagia (a swallowing disorder related to his cerebral palsy). Shasta blogs about Malachi's journey at Outrageous Fortune. I have been following Shasta's journey thought her Dark & Light Kickstarter campaign, which has resulted in a published a children's book, Dark & Light: A Love Story in Black and White, to raise funds for her son's therapy. I am so happy to have Shasta here today to share her perspective!

Our life in five words:

Four qualities I look for in a therapist:

Three resources I can’t live without: 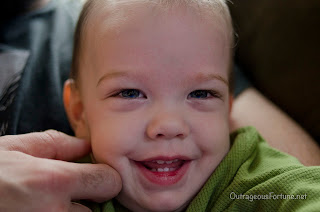 Two words (or more!) of advice for therapists working with children with cerebral palsy: 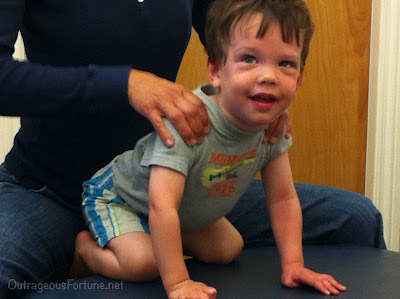 As I said before, I think a major shift needs to take place towards viewing CP as a brain disorder instead of a muscle disorder. This is a really huge and complex issue, but I highly recommend reading Kids Beyond Limits to really understand how different the approach to CP can be. I've found this approach helps me relate so much better with my son's struggles. Instead of thinking that there is some sort of invisible and incomprehensible resistance in his muscles, I now know that the actions I see are simply a byproduct of disorganization in the brain. It's like if I held a glass of water with one hand and checked the watch on the wrist of my other and accidentally poured the water out. At that moment, my brain was just disorganized — confused as to which hand it needed to rotate. That's what the majority of CP symptoms are like — movements that aren't sequenced correctly or are grouped ineffectively together in the person's mind. So the task is teaching the brain the difference between different parts of the body and the sequence needed for using them effectively, not stretching, cutting, botox-ing or otherwise treating the muscles as separate from the person inside who is wielding them.

A word of advice for the parents of a child newly diagnosed with cerebral palsy:

Well, I'll get off my Kids Beyond Limits/ Anat Baniel Method soapbox for a moment and just talk about the effects of the diagnosis on a parent's psyche. For this, I would recommend finding or creating a community of parents going through the same thing. For me, I started a blog and met lots of parents — even parents of multiples with CP — who made me feel not quite so alone in my struggles. The difference between how I felt before I had any real idea of what living with CP would be like and today is like night and day. All fear comes from not understanding the future. The more you can learn about what it's *really* like to have a kid with CP, the more you see that it's not so scary. 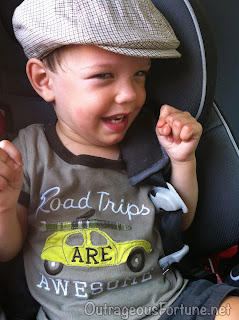 One dream for my child:

That he will walk independently. I've told myself that I will be happy if he can just crawl and sit up independently. I will consider us to have crossed the finish line. But if I'm really honest with myself, I do dream he will go further than that, even though, in fact, especially because conventional wisdom says he won't.
Actually, more than anything, I hope that he is accepted for who he is by his peers. Yes, more than walking, or even crawling, I hope that he can make friends and keep them.

What I do to rest and recharge:


Thank you so much for stopping by, Shasta! Your words are truly inspirational! Readers, you can follow Malachi's progress on Shasta's blog, Outrageous Fortune.
Other ways to keep up with Shasta and Malachi:
Twitter @ShastaKM, Facebook, and Pinterest
And of course, don't forget to check out Shasta's new book, Dark & Light: A Love Story in Black and White. 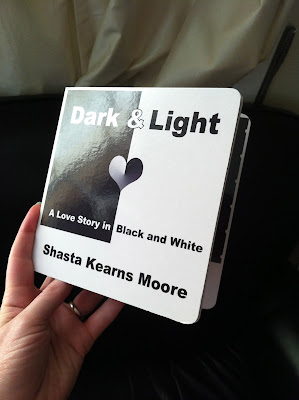